MY INTERVIEW WITH NEW NOISE MAGAZINE

Below is a piece that ran recently in New Noise magazine on BLAZE: Operation Persian Trinity. Below that is the extended, unedited interview.

Be sure to check out NEW NOISE MAGAZINE and connect as they are one of the only remaining true publications devoted to independent music.

Thanks to my man John B. Moore for writing the piece. 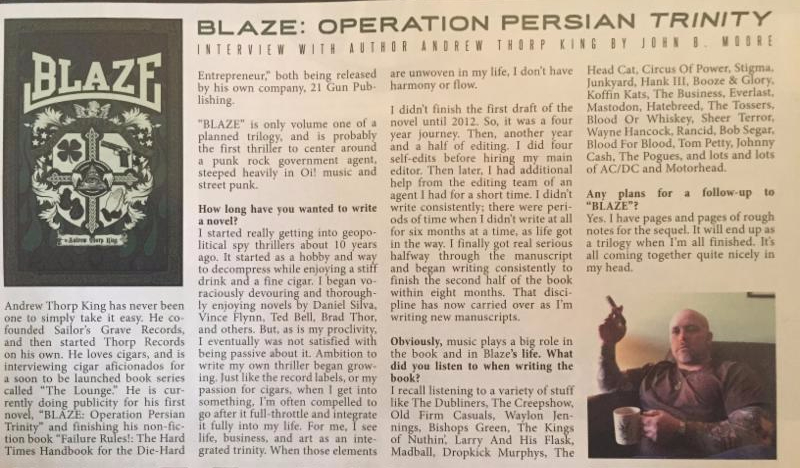 The book is entitled Failure Rules!: The Hard Times Handbook for the Die-Hard Entrepreneur.
I reckon I'll be done with the first draft by the end of 2015, edit during first half of 2016 and release Q4 2016 on my publishing company 21 Gun Publishing. The artwork is already done and looks great. My man Pete Macphee (Dropkick Murphys, Social Distortion, Hank III), did the design and kicked ass. He did the BLAZE art as well.
NN: Any plans for a follow-up to Blaze?
ATK: Yes. I have pages and pages of rough notes for the sequel. It will end up as a trilogy when I'm all finished. It's all coming together quite nicely in my head. The sequel will be less expository and cerebral and have a lot more action in it. There was a lot of set up in Operation Persian Trinity, but now that the characters are fully established, the sequel will dip less into back stories and internal monologues. Moving the story forward, the sequel will see Zack Batt getting his 'hooligan on' with his skinhead friends in London, Liam McCardle entangled with old IRA enemies in Ireland, and Blaze embarking on a full-on mission of vengeance against the Mexican drug cartels as he develops a new Latino love interest. All the while, things continue to get hot in the Middle East, Russia, and Israel with an urgency that begs both Blaze and Zack's involvement.

That said, I'm holding off on writing that for a while. I've really only done exploratory marketing on BLAZE: Operation Persian Trinity, and I want to continue experimenting with different marketing for a while until I find the right special sauce to build a readership and implement a holistic plan for future books. This will take time. In the interim, I'll be working on a few other manuscripts.

As I mentioned, the next book will be Failure Rules!: The Hard Times Handbook for the Die-Hard Entrepreneur, a non-fiction book on the psychology and spirituality of entrepreneurialism. Once that's finished, I'll be working on an episodic series called The Lounge: Where There's Smoke, There's Family. Having spent a lot of time in cigar lounges, both in the Philly area and in Ohio, over the past ten years, I've internalized the unique bond and brotherhood that forms between the regulars at certain lounges. The series will be released in small episodic books around 7-10K words per episode and listed for a real cheap price. I haven't decided on the frequency of release, but I'm thinking I will release four episodes per year. At the end of each season, the entire season will be compiled into one book. A season will likely be eight episodes.

The series will be less about cigars and more about the raw, gritty, vulnerability of male vulgarity and authenticity that occurs when man can be themselves around one another. The cigar lounge will be the setting - the man cave sanctuary where everything gets real. The cigars themselves, and the booze that accompanies them, will be the accents and elixirs that provoke the raw authenticity of the characters.  It will include a host of diverse characters from all walks of life and all ethnic and religious backgrounds - each one carrying distinct personality and a vortex of complex charisma and special issues. The series will marry ball-breaking male-centric humor with the grappling sting of sorrow and dysfunction that is unique to middle age men.

The series will largely be inspired by my own experiences, but will be shaped and influenced by my love for the TV show Rescue Me with Denis Leary, the barber shop scene dialogue in Clint Eastwood's Gran Torino, the comedy of Bill Burr, and more recently, Bill Murray's character in the film St. Vincent.
NN: Are Sailor's Grave and Thorp are still a focus for you?
ATK: Always. Last year we continued to work closely with The Koffin Kats and The Creepshow while releasing Booze & Glory's recent full length As Bold As Brass and a new seven inch for The Business called Back in the Day. Right now, we're gearing up to see Booze & Glory come stateside for their first US tour, kicked off by an appearance at Black N Blue bowl in NYC, as well as forthcoming tours by The Creepshow and The Koffin Kats.
Sailor's Grave has been the most active of the two labels simply by virtue of ongoing organic momentum. Thorp Records has been inactive for a while. We're not sure what direction yet we will steer that label. I've been discussing with my business partner and cousin, Duane Miller, about what the future holds. We're looking to broaden the scope of the services we offer into other verticals to make the label experience for future signings more of a full service cooperation. We've never really gotten deeply involved with tour booking, publishing, merch fulfillment, artist management, and other needed services sometimes offered by labels. We'll be looking for ways to develop each one of these services in the future. Also, we'll be looking to create other ancillary businesses to work in tandem with the labels, such as an online boutique distro, a clothing brand, music news site, etc. All these ideas are on the table right now before we sign any new bands.
NN: Any new release planned for this summer?
ATK: Not this summer. The Creepshow is working on a new record, but I'm not sure of release timing yet. Same with The Welch Boys. As I mentioned, we want to re-structure our model some before we endeavor in a new batch of signings. That said, we will always gladly release new records from the existing active roster. And if something new and irresistible comes our way, we'll, of course, seize the opportunity.
NN: How did you first get into starting and running a record label?
ATK: Actually, I tell this story in Failure Rules!: The Hard Times Handbook for the Die-Hard Entrepreneur in great detail and with wide context. The short version is that I was newly married, unemployed, and delivering pizzas. I had a dream of starting a label that germed during my last year of college as I got more and more passionate about hardcore and punk rock and was going to a lot of shows. When I was laid off, I used those circumstances to thrust me into taking the risk. I maxed out my credit cards, got some nominal advice from some people I knew who ran labels, and started Thorp Records. Breakdown's Battle Hymns For an Angry Planet was my first release. I lost money on it but kept pushing forward with releases while learning the ins and outs of the business while working my day job at Relapse Records, and later Lumberjack/Mordam distribution. Eventually the labels became successful after a string of records by Madball, Blood For Blood, Ducky Boys, Slapshot, Ramallah, Sheer Terror, Fordirelifesake, US Bombs, Mad Sin, The Kings of Nuthin' and others. I ran the labels full time for several years until hard times hit. After that, I pursued other things as the labels slowly made their way back in the black. During that time, we re-structured our model to now maintain what is a steady and workable long term business model. Between both labels, we've released over 110 releases.
NN: What's next for you?
ATK: All kinds of stuff. I always have a bunch of pots on the stove while leaving a few burners open for unseen opportunities. I'm currently wrapping up my manuscript for Failure Rules!, organizing notes for  The Lounge and the sequel to BLAZE, and experimenting with marketing for BLAZE. Thinking about other writing ideas like doing biographies for iconic hardcore punk entrepreneurs. Dudes like Ken Casey, Lars Frederickson, Jamey Jasta, Duane Peters and the like. Of course, I've not approached any of them yet. These are just ideas in my head.

I'm currently looking into a variety of other possible business pursuits in online marketing/alt finance. I'm working out the details for a new blueprint for the record labels. Making plans for a podcast I'm going to launch, some youtube stuff, planning a revamp ofwww.andrewthorpking.com. Doing cigar reviews on my blog in conjunction with Famous Smoke Shop. All the while, I'm hanging with my three kids, my paisan girlfriend, hitting the gym, working as an operations analyst for an online commercial bank, and always fitting in time for massages, fine cigars, and good bourbon.
NN: Those are all the questions I had. Anything else you want to mention?
ATK: Mind your business. Never give in. Choose yourself and live authentically. Find a way to have leverage instead of being someone else's leverage in as many areas of your life as possible. Don't plagiarize the world view, religion, or politics of your family, your friends, the media, or even your scene. Find your own. Listen to your internal spirit voice. Live to win even as you fight against the reality that we're all born to lose. In all circumstances, be nimble. In all challenges, improvise, adapt and overcome. Nothing is safe, and if you navigate life with balls, this is a good thing. 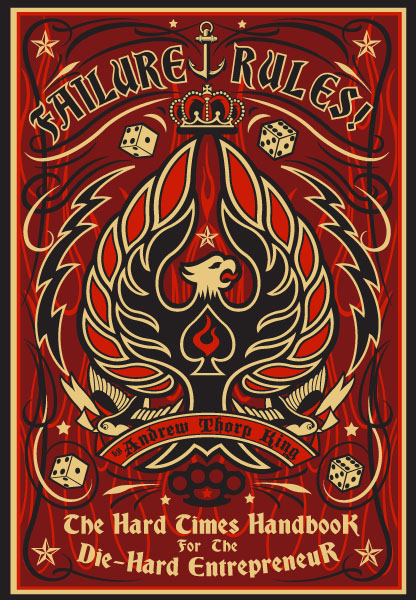 For insights on how to fail to success, create chicken salad out of chicken shit, and to improvise, overcome and adapt with a balanced life, look for my forthcoming non-fiction book Failure Rules!: The Hard Times Handbook for the Die-Hard Entrepreneur. 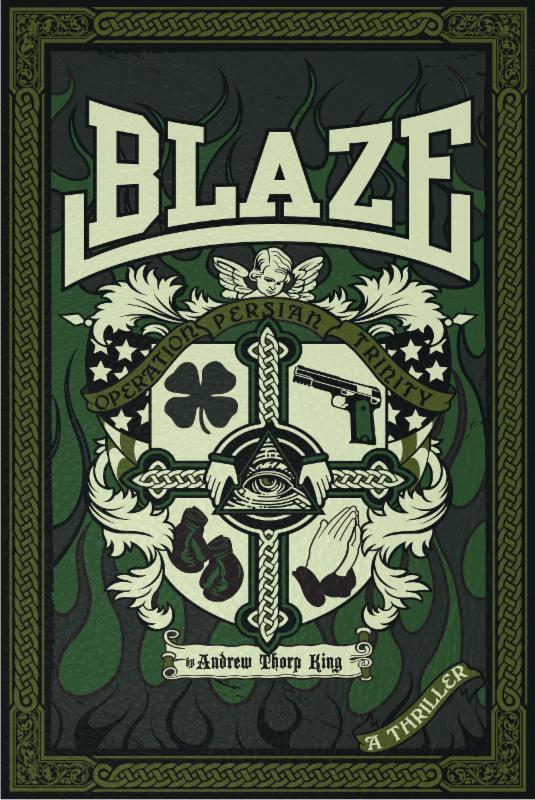 To read a kick-ass spy novel with a tattooed, cigar-smoking Mick anti-hero protagonist who has a love for hardcore punk music, give a read on to BLAZE: Operation Persian Trinity and dive-in to some supernatural near-term geo-political forecasting.
Posted by Andrew Thorp King, Thriller Writer at 12:32 PM